View source
“Sometimes when something shoots you down you gotta face it when it hits ya, lingering ain't going to do nothin' but worsen the reward.”
— Teri to Sprout

Teriyaki is a pale-ish orange that fades to a dark browns round her head with a brown nose marking near her gray beak. She has light gold feathers that have a gold outer ring as well as orange tinted eyes and brown pouches near her gray legs.

Teriyaki has a rash and cocky personality, only softening for Sprout at times. She's also loud and persistent, believing with hard work anyone could possibly do anything as well as fighting for the right justice.

Although she does care for the less fortunate and won't be afraid to defend their side, just to put the threat in place not mostly for their safety. 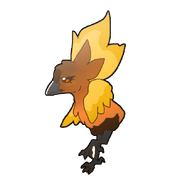 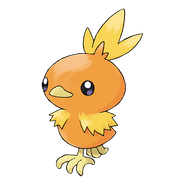 A Natural Torchic
Community content is available under CC-BY-SA unless otherwise noted.
Advertisement