Fallen Hopes, Chapter 2
“First up, the best Jackal ever in town, me,”
— to Teen Group sarcastically, chapter 2

Tawny is a male 16 years old Jackal and the leader of the Teen Group.

Tawny has wavy braids and a 3, kick-up front hair. He has sharp eyes and always clear teeth. Tawny is tall and wore a brown shacket with a white, striped shirt and gray jeans accompanied with black cleats. He has soft cinnamon brown fur and vanilla markings with amber eyes.

Tawny is pleasant and caring. However, he is mostly sarcastic and loves to intentionally overexaggerate things. He knows when it's 'not the time' in situations and takes it slow and is patient. He dislikes it when others are left out and will always find a way to route them into social events.

There is nothing known about Tawny's history other than he's apart of the Teen Group. Where he went during the attack is unknown.

Dodge is a friend of Tawny tough their specific relationship is unknown.

Tawny knows Pail is introverted and knows her main limit of emotional intake. He appears to mostly help her get back into a positive mood but has no romantic interest, as Pail doesn't to him as well.

Poke is a friend of Tawny tough their specific relationship is unknown.

Tawny and Rash seem to match morals and both believe in the same chances of things.

Spot is a friend of Tawny tough their specific relationship is unknown.

“Welcome crew! (...) It’s been a little over a week since we’ve continued discussion, but since we’ve been able to find time once again,”
— to Teen Group, chapter 2 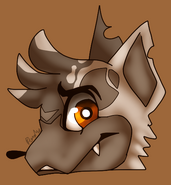