View source
“You know what, I've been through a lot. I've been hurt, I've been tilted, yet I can still find hope in the world and others. I found light in the ones who hurted me which healed me over. I'm not going to let an interdimensional being destroy that.”
—

Snaps is one of the few humans, specifically the third, to arrive in the world. She is currently one of the founders and the main manager of the Guild of United Passion (Passionisity) and is currently dating Grudge.


Short for Shy Crocodile or Embarrased

Snaps generally has turquoise base scales with dark blue markings, rose, soft-pink spikes and a peachy beige underbelly. She has silver, almost-clear eyes that are highly reflective. Snaps is coated in scars mostly around her upper half.

She is slightly thinner than the average Feraligatr with a paddle-shaped tail that has a powerful blow. She's often seen with a brown and silver satchel covered in silver glitter and with 5 pockets to sort each type of item. She is recently wearing a necklace made from leather and a Bonspei gem that allows her to sense unnatural occurences.

Snaps is a semi-optimistic, caring Pokemon. She tends to others with problems and tries to help them get through her struggles, for example, she aided in Grudge's recovery through self deprication, but also recognizes when she needs to give others space, and understands that she isn't a miracle worker.

Snaps is shown to be intelligent and resourceful. She is creative in ideas, sometimes even solutions. She is supportive of others and thinks of a reason for every single action.

Her weak points are that she isn't too great at socialization, a skill which she's currently trying to mend, and can become pessimistic at times. Additionally, sometimes she can loose her temper easily which she struggles of getting control of.

Snaps's storyline is similar to the general PMD Red or Blue storyline, the only difference is on the following points:

A few days after the calming of earthquakes, Snaps and Blossom discover the evolution chamber. Afraid, she didn't evolve at the same rate as everyone else except for Coil. It was only until Blossom at her final evolution convinced Snaps enough to drag her to at least evolve into a Croconaw. Later after recruiting Kyogre, Snaps finally brought herself to evolve into a Feraligatr, eventually loving her new appearance. Though this evolution broke her skull and exposed her scars, she doesn't mind.

Interested in the Ancient Relic, Blossom tapped Snaps to bring Orca along, Snaps eventually agreeing. They faced off the Regis and returned to recruit Mew in the 5th try. The furthest they went was oddly floor 69, it may be just for jokes.

Snaps and Blossom were behind Latios' tail and followed him into Northern Range where they were greeted by flying types. First attempt they bought Nimbus but after Nimbus was stranded, they brought Orca. After retrieving Latios and getting the reason he was taking TMs, Team Arcane helped save Latias in Pitfall Valley and reunited the two. They both asked to join Arcane's team later on.

Snaps and Blossom looked over conversations between Medichan and Ekans when visiting the Evolution Chamber with their members to evolve them. Soon enough, they were sent a request to save Medichan in which they completed with Nimbus.

2 Mornings after rescuing his allies, Grudge came to Snaps' door step early in the morning while she was preparing for an early walk. Surprising her, Snaps listened to his request and she relayed it to Blossom. They head out for Mt. Freeze where Snaps midway reveals her hypothermancy. They take a break to warm her up to progress. When they reach the top, Snaps's suspicion of him is confirmed and they break out into a mini-argument which Blossom and Ninetales had to break up.

On negative terms, Blossom and Snaps still agree to help Grudge reach the depths of Murky Cave. At the depths, the Judge request for Snaps to answer for Grudge which shocks her but she answers truly despite her negative relation. She fails but Grudge responds truly, freeing Gardevior. After that it was a while until they met again.

20 days after the venture, Snaps has a breakdown, everyone in town trying to help her though it only made it worse. Being able to relate in a way, Grudge finds Snaps deep in Purity Forest and communicate between each other and Grudge helping calm her. They return, Grudge relaying the information to everyone.

1 year after, Team ACT settled a team retreat where two Pokemon from opposing rescue teams which Snaps was assigned with Grudge. In Sounded Grotto, Grudge and Snaps originally struggled with working with each other and oddly enough, sometimes they would upset each other. However quarrels stopped after Grudge and Snaps come into an agreement after Snaps saved Grudge from a Dragonite, and Grudge saved Snaps from a Victreebel. Their teamwork enhanced and together, boosted by Empowered Seeds, they were able to finish the dungeon to which they relaxed in the flower field. During the relaxation, Snaps gifts Grudge a flower crown made from Sunflowers, stating that it complimented him. Grudge accepted the gift, and after returning, Snaps returned home.

Explorers of Darkness, Time and the Skies

Snaps' role is the head of "Rescue Central" a community where most, if not all, rescue guilds, and teams stem from. She is also known to be the strongest Rescue Team leader clocking at over 70 levels and only being challenged by Grudge at level 65 and Alakazam at level 67.

Snaps considers Blossom to be her best friend and usually would do anything to pay back for helping her. Snaps also looks to Blossom for comfort and opens up about topics that she wouldn't discuss with anyone else.

Snaps originally had a negative relationship with Grudge. While at first she wasn't a direct rival, soon Grudge constantly tried to weaken Snaps. She forgave him for a short while after Grudge saved her at Sky Tower, but she returned a one-sided hatred after her thoughts of Grudge being the one in the tale being confirmed.

They were on neutral terms at the end of Murky Cave and the Relationship Retreat. Snaps fell in love with Grudge after a prolonged conversation while visiting Grudge's house, where the next day, Snaps would offer him a gift of a dandelion which he accepted Before they were seperated, Grudge returned the flower and it is implied that Snaps even kept it at full health as a memory.

In "Explorers", Snaps was excited after they were reunited. She grew passionated for Grudge to the point of staying up late to wait for his team to return. Grudge would constantly visit Snaps and she would appreciate it.

Sometime during "Gates to Infinity" they started dating and in Chapter 16, Snaps and Grudge left for a Retreat. It is heavily implied through Snaps' body language that even Snaps was kissed by Grudge at some point. 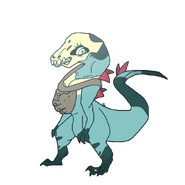 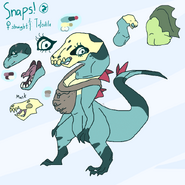 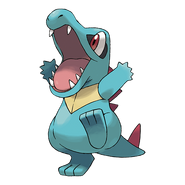