"Wouldn't want to ruin the surprise would we?"
There are spoilers of Sonic Forces; Sight of Mind. Please proceed with caution.

“Might as well have your best life before being locked in a dark prison for many years,”
— Scavia to Pail

Waist Belt with a dagger and a Wisp Sniper

Scavia is a 16 year old female desert dragon mobian and an associate of Infinite and continuously apart of Eggman's Army. She is a bounty hunter who was set after Gadget, Whisper, Pail, Spot and Dodge successfully aided the Resistance majorly and was sent out to assassin to capture them.

Scavia is a tall, desert dragon mobian with a long tail tipped with a venomous, sharp stinger. She has swirled-down horns and diamond-shaped eyes, usually with bags under them. She has a plated underbelly and a smooth scaling.

Scavia has sandy, dull-ish yellow scales with sand-brown patterns, circles down her neck and a overscale marking on her head. She has indigo eyes and indigo hair wrapped into a braid near the bottom and is generally rough.

She wears covering. fluffy clothing with thick beige shirt and dark brown jackets. She has army-green jeans and general black shoes. She wears a waist-satchel with a dagger on the left and a wisp sniper.

Scavia appears on the outside as ruthless, uncaring, and threatening. However her self esteem is low and she's easy to peeve when her weak spot is hit (ex; Sonic teasing her). In addition, Scavia will even do unnatural things to get what she wants like waking up at 6 am and rushing her blacksmith.

Scavia tricked Pail into coming to her by lying to Quill about being Poke, one of her friends, and Quill telling Pail. She threatens Pail to come with her and after much hastes, makes a much less reckless notion and offers a truce to which Pail half-accepts.

She intended to send Pail to the Death Egg Transportation Prison but realized it was full and was forced to keep Pail in her living room. In 6 AM in the morning, Scavia dragged Pail to aid in getting their weapons from Sisorra. Scavia also brought Pail to check the Listing Board, realizing distastefully that Scavia had to feed floor 1 which contained Sonic. She foreshadowed what was to come, trying to set Pail in chains to avoid Sonic using that as joke material and attempting to swap with Pail whenever coming near him, but Scavia was too slow and Sonic continued to tease Scavia from the way down and back until reaching the exit.

Scavia tried to stop Pail from laughing at her but stopped after the first attempt. When Pail asked Scavia whether she's seen the sunset, Scavia avoids the question and ask if Pail is ready to head back.

In the room, Scavia opens the window for Pail and allows her to look out of it. Pail questions why and Scavia responded concerningly. Pail questioned about the way Scavia worded her response but Scavia dodged the question. When Pail asked for drawing materials, Scavia provided and watched Pail draw until half way into Pail's drawing to eat.

Infinite and Scavia are long time associates. There isn't much known between them but one can assume they enjoy each other's company from their interactions.

“Don't get your fluffy tail up in hope, there isn't any mobian here to save you, nevertheless a mobian that can get through me, if anything, you're lucky to have been underjudged by Infinite.”
— to Pail, chapter 7

“What are you going to do brat? Even if you escape there’s not much you can do out here, you’re a kid for sake, I mean they are too, but you don’t seem the ‘sacrifice for all lives’ type,”
— to Pail, chapter 8

“Infinite, it has her wisp in it. I know war is cruel, but honestly this cannot do nothing with you in check of it,”
— to Infinite, chapter 8

“Bah! Like everything happens in a second (..) Sadly no. Eggman decided to port all prisoners at the same time since we caught Sonic,”
— to Pail, chapter 8 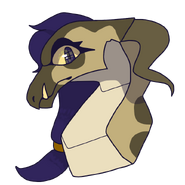